Putin’s supporters in the West

In addition to being friends with Vladimir Putin, Former consultant Gerhard Schroeder is now a director and board member of the energy company Gazprom and chairman of the board of the largest Russian oil company, Rosneft.Both are controlled by the Russian state.

despite of Closeness to Putin raises alarm in GermanySchroeder did not relinquish his position, not even after a request The chief of staff resigned last week over two decades. Like Albrecht Funk, three other Schroeder employees decided to leave Schroeder after refusing to give up lucrative positions in Russian companies..

Last week, Schroeder wrote on the social network LinkedIn, “Both sides make mistakesHe considered that NATO had expanded too quickly to the east, and in this way, he had provoked the Kremlin. This was the most difficult position for Schroeder from Moscow, having even defended the concentration of Russian soldiers on the Ukrainian border, which embarrassed Berlin.

In Germany, the pressure of the political wing was increasingly intense. “The termination of trade relations with Putin has been delayed. I hope so unequivocallySPD leader Lars Klingbeil wrote on Facebook. It also asks that all benefits resulting from Schroeder being a former chancellor, including a pension cut, be withdrawn.

It is the current disagreement with the positions of the 77-year-old former chancellor that has prompted the current German chancellor, Olaf Schulz, to ensure that he is not influenced by his predecessor in the context of the current crisis: “I didn’t ask him for advice and he didn’t give me anything either.“.

Putin’s opinion of the former chancellor is clear. When asked on February 15 about the criticism leveled in Germany after Schroeder’s nomination to Gazprom’s board of directors, Putin considered it to be “An honest person we respect, and Germany, the Europeans, will have someone who can exert influence and get information directly from Gazprom. We can’t help but rejoice“.

According to the Russian president, the choice of Gerhard Schroeder would be “a natural thing”, since the former German chancellor is also a member of the board of directors of the Nord Stream gas pipeline (by Gazprom), which was opened in 2011 and whose construction played a decisive role.

Germany strengthened its position towards Russia after the invasion of Ukraine, which had multiple effects on society. On Tuesday, the Munich Philharmonic Orchestra dismissed conductor Valery Gergiev after he refused to distance himself from Putin and soccer club Schalke 04 ended its sponsorship of Gazprom.

The United Kingdom has announced new sanctions against Belarus, the Russian Central Bank, Russia’s sovereign wealth fund and its chief executive. Downing Street is considering imposing new sanctions on Russian oligarchs living in London, while Concerns are growing that the Russian president’s close ties are also those of the British prime minister, as the eloquent criticism of Boris Johnson contrasts with the weakness of sanctions imposed so far on the oligarchy..

However, the potential Russian influence on the fate of the United Kingdom is a topic that has jumped since the poisoning of former spy Sergei Skripal and his daughter to the pages of newspapers, as evidenced by this investigation by Watchman.

Russian Roman Abramovich confirmed, on Wednesday, his intention to sell Chelsea Football Club, as well as two properties in London. Abramovich is as close to Vladimir Putin as Boris Johnson, who refused to answer the opposition leader’s question to the prime minister about why Abramovich had not yet been punished.. 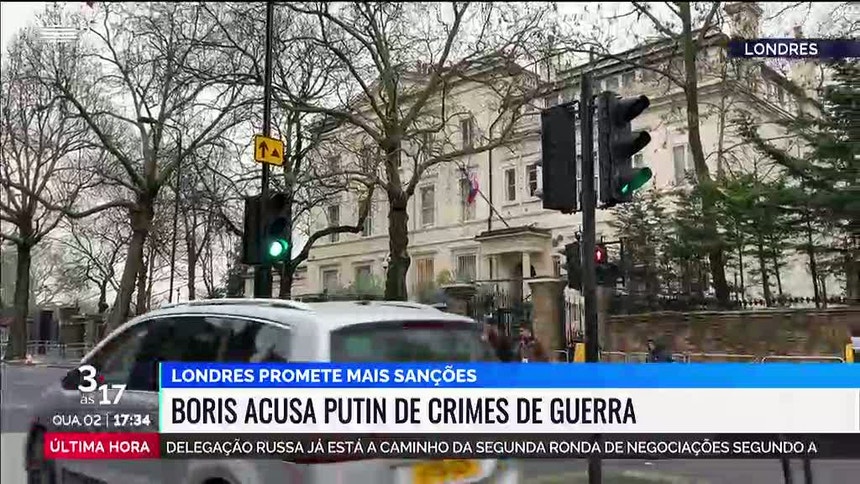 In addition to Abramovich, who received Portuguese citizenship due to Sephardic origin, six other Russian citizens living in London were noted for their generous donations to the Conservative Party or personally to the Prime Minister. without their knowledge of any illegal practices, Potential conflict of interest increases public interest and puts pressure on Boris Johnson regarding his friendships.

One of these friendships is with Evgeny Lebedev, owner of the Evening Standard and The Independent newspapers, and with his father Alexander Lebedev, a former KGB colonel. Boris Johnson was one of the guests at the luxurious father-son parties In the homes of London and Perugia, Italy.
The echoes of these parties were so disturbing that Italian intelligence submitted a secret report to the Italian Parliament’s Oversight Committee. In the report, The parties were called “red light” and it was questionable whether Alexander Lebedev used these parties for “kompromat”, to obtain bargaining material, often of a sexual nature, to apply pressure and that this was a classic strategy of the KGB and its agencies. what happened to you.
The report traces Alexander Lebedev’s career since he worked as a Russian spy in London between 1988 and 1992, and states that he was linked to “espionage and interference” operations.
The author questions whether Lebedev Sr. actually left the Russian secret police, since his resignation was deemed “too unclear”, and claims that he continued to attend annual meetings in the Kremlin.
Boris Johnson appointed Evgeny Lebedev Baron and Senator in July 2020, but their friendship goes back to the time when the current prime minister was mayor of London. And when I began to invite him to Palazzo Terranova, in Città di Castello, Perugia. thatPress article 2019 Watchman He realizes that Boris Johnson will still attend these parties.
See also  SEF is pressing ahead with collecting biometric data from registered Britons in Madeira and the Azores

Huge donations to the Conservative Party

Other Russian businessmen, such as Chernokin, made their fortunes after the Soviet era and contributed generously to the Conservative Party.

Lubov Chernukhin has donated £2 million to the Conservative Party since 2012, including two tennis matches with Boris Johnson, once when he was mayor of London in 2014, and once as prime minister in 2020. Lubov Chernukhim also has access to other prominent Conservative politicians. Like the current British Foreign Secretary Liz Truss.

However, the investigation of the Bandura Papers revealed that the husband, Vladimir Chernokhim, the former deputy finance minister of Vladimir Putin, maintained active business interests in Russia until very recently. Russian political experts note that there is no big business in Russia without showing loyalty to Vladimir Putin. The investigation also casts doubt on the source of funding for the Conservative Party.
In 2918, during a legal process, Chernukhin admitted that his “style of work” was to hide commercial interests, using “fronts”, “camouflage” and “silent participation” in specific trade agreements. “I want to be invisible”He Said.

Of Chernokhin, who left Russia in the early 2000s and settled in Britain, Boris Johnson said in 2015 that there was no indication that he was a close confidant of Putin.

Alexander Temirko, according to Byline Times One of the elements of the “Eastern European Business Group” that persuaded Boris Johnson to join the cause of Britain’s exit from the European Union and was behind the attempt to oust former Prime Minister Theresa May, to implement a “hard Brexit”.
See also  Germany nationalizes Gazprom unit to guarantee gas

Temerko, born in Soviet Ukraine, is the partner of Russian Viktor Fedetov. They control the Aquind Company, which intends to build a submarine connecting cable between Great Britain and France to supply French electricity to Great Britain, which arrives near Portsmouth.

Both partners and the company Contribute large sums to the Conservative Party. All. Temerko donated £700,000 and a similar amount to Aquind. According to the Election Commission, Temerko and other related entities made donations to 11 MPs, including former Conservative Party chairman Brandon Lewis and Rishi Sunak’s Richmond office.Yorkshire.

Temerko helped fund 27 local branches of the Conservative Party and paid £90,000 for a bronze bust of former Prime Minister David Cameron during a fundraiser in 2013..

Temerko, who had already expressed his opposition to Vladimir Putin, was close to Russian Boris Yeltsin and was a director of a Russian state arms company. In the late 1990s, Temerko went to work for the Russian oil giant Yukos, which began to suffer from negative discrimination from the Kremlin. In 2003 its president, Mikhail Khodorkovsky, was sentenced to prison for corruption and Temerko fled to the UK the following year.

In 2015, he wrote an opinion piece in the newspaper Watchman In which he called on the United Kingdom to arm Ukraine. “Familiar The method of work Putin and his clique,” Temerko predicted:Force is the only language they understand. Anything else is a weakness that is exploited while it prevails. Showing a united and genuine determination by the United States and the European Union to do whatever it takes to preserve Ukraine’s territorial integrity would prevent the Kremlin from going its way.“.

Temerko’s other friends will be Nikolai Patrushev, whom he considers a “decent family man.” Patrushev is also the leader of the Russian Security Council, whose critics such as Anna Politkovskaya, Natasha Estemirova and Boris Nemtsov have been assassinated.

a think tank The Washington Center for American Progress, which is close to the Joe Biden administration, considers that “uprooting the oligarchy in the Kremlin will be a challenge, given the close ties between Russian money and the UK Conservative Party, the press, and their real estate and financial interests.” “.