40 years of warming temperatures in Europe

July was a very hot month. So hot that in seven European capitals – Berlin (Germany), Dublin (Ireland), Stockholm (Sweden), London (England), Ljubljana (Slovenia), Rome (Italy) and Zagreb (Croatia) – the highest-recorded thermometers in those regions (in July) more than 40 years ago. In the case of London, records were not broken for the month of July alone. The heat wave in the month that just ended was so intense that on July 19, temperatures in the UK topped 40 degrees for the first time.

As for Portugal, temperatures in Lisbon reached 39.4 degrees in July. In the first two weeks of the month, the average maximum temperature in mainland Portugal is 33.9 degrees Celsius, which, according to the Mar e da Atmosfera Institute, is 5.2 degrees higher than the average high of the year.

A burning region in the European Union

Between 1 January and 23 July 2022, 515,475 hectares of forest were burned in the European Union. If we go back to 2006, we see that we are heading into a historically worrisome year in the current millennium. This year, the flames have devoured nearly four times the forest that burned between 2006 and 2021 on average in the first seven months.

As of last Wednesday, Spain, Romania and Portugal were, according to the European Forest Fire Information System, the member states with the largest burn area.

Drought maps, obtained from data from the European Drought Observatory and Copernicus Emergency Management Service, show the values ​​of the combined drought index in July 2022. The image reveals that 45% of the region is under “warning”, that is, has a soil moisture deficit. More: 13% of the European region is in an “alert” state, which consists of a state in which vegetation is already experiencing a lot of water shortage (water stress) and even there is a deficiency of vegetation.

As of last Thursday, 59,852 hectares of Portuguese forests had already burned in 2022. Looking at the past 10 years, it is not unusual for Portugal to have so many areas burned in just seven months. In this category, the only year to beat the current one is 2017 (74,340 hectares have been burned as of July 28 of that year). Between the Pedrogao Grande fires and the October fires, it was a heartbreaking year, as 465,581 hectares of forest would burn.

More Portuguese forests actually burned in the seven months of 2022 than in 12 months of each of the following years: 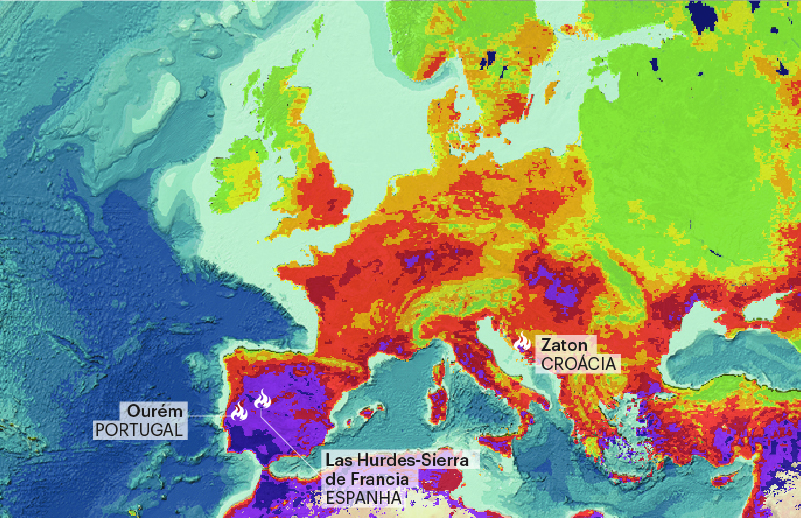 The map of fire hazards in Europe for July 14 by Copernicus shows that much of the Iberian Peninsula, and almost all of Portugal, is in the “extremely dangerous” category, with the south of the country (Alentejo and the Algarve) appearing on a similar tone.. even darker, than “dangerous”. Very severe” from a fire.

The image was taken at 11:31:55 on July 10, when the Copernicus Sentinel-3B satellite passed over the Iberian Peninsula and captured temperatures at that moment, using a sea- and land-surface temperature radiometer.

3D printed and ready to ship on SpaceX's Starship. Are these the homes of the future on Mars? - Multimedia